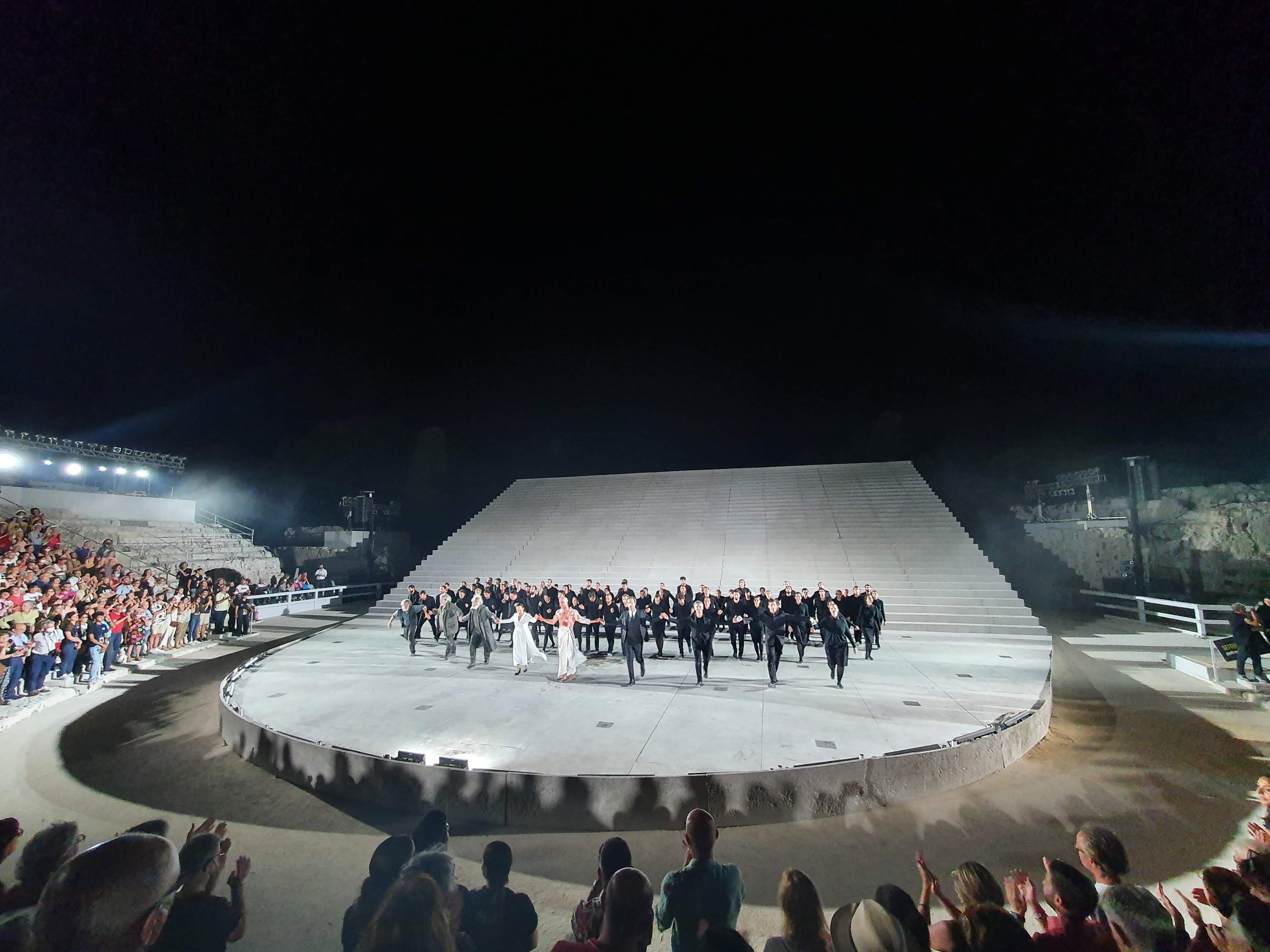 Wonderful and calibrated staging by the Canadian director for Sophocles' classic.

Carsen chooses a rigorous, almost architectural mise-en-scène, building over the orchestra of the Greek theatre, right in front of the spectators huddled on the steps, an immense staircase, a grey monolith, an empty counterbalance and mirror of the dusty, chipped steps crammed with people in the Greek Theatre.

This majestic staircase silhouettes the action of the characters, with Oedipus and his court appearing from above, from the palace; as if from an unreachable, intangible power. Oedipus descends the steps, approaches the suffering people, dressed in black, sober, modern, universal. The folk is bringing death on the stage: they’re mourning for the plague, they carry so many black clothes, held in their arms like corpses. The people come to ask for a solution, they rely once again on Oedipus, he who, thanks to his intelligence, solved the riddles of the Sphinx and freed Thebes from the scourge of the monster.

Iconic, simple, pregnant, absolute Carsen's staging. Only a few colours: white, black and grey. He works on distance, on the characters who look at each other from afar, on the symbolic poignancy of a Tiresias who comes from 'below', from the people, and who is the only one capable of passing over the shapeless mass of black clothes accumulated in the centre of the stage by the chorus.

The soothsayer tramples on what is sacred because he knows already everything and wants to prevent Oedipus from knowing and discovering his past. Oedipus does not know and wants to know, his trust in reason and in the 'logos' is almost naive in its infiniteness.

Sophocles stimulates the sadism of the spectators who already know everything, they watch with bland but convinced satisfaction the spectacle of a man plunging into the abyss. Compassion is only formal, a façade, in reality what prevails in the spectator is what the Germans call 'Schadenfreude'.

Robert Carsen has the immense merit of leading us into the story with precision, without making us perceive his meticulous work. Maniacal is the preparation of the actors, all of whom are excellent, very clear in their speech, precise and at the same time, loose, fast, real. Never an affected dialogue, never a conventional pose, never an old-fashioned theatre inflection, simply quick conversations, incisive sentences, clear and direct concepts.

You can see the great work of an international creator, of a close-knit, determined, prepared team.

It was a great evening of Greek theatre that seen in Syracuse, where all the actors shone indiscriminately. From Giuseppe Sartori's determined and sober Oedipus to Maddalena Crippa's quick, ironic and incisive Jocasta. Tiresias was Graziano Piazza at his best, led and illuminated by the direction. And then Rosario Tedesco, Elena Polic Greco, Paolo Mazzarelli, Massimo Cimaglia, Antonello Cossia and Dario Battaglia. A single body, a unity of intent for an unforgettable performance.

Grateful and long applause at the end of a great evening of theatre in Sicily.