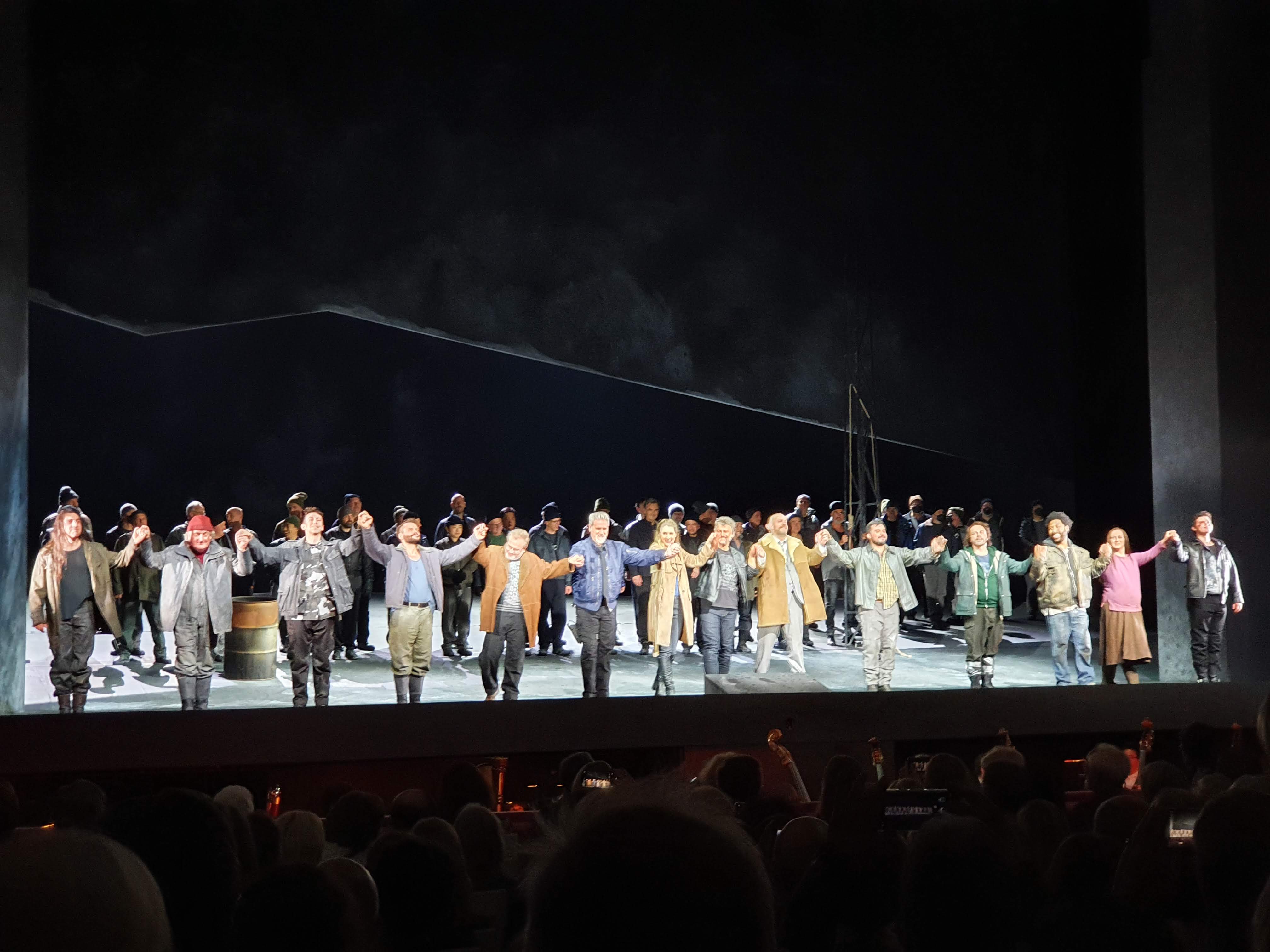 Giacomo Puccini's La Fanciulla del West is once again on show at the Bayerische Staatsoper in Munich, in the 2019 production staged by director Andreas Dresen, with scenes by Mathias Fischer-Diskau and costumes by Sabine Gruenig.

The performance was of high quality in its entirety and certifies the remarkable ability of the Bavarian opera to propose complex titles, which require a large number of solo parts and an accurate and realistic staging in order to be successful.

Such is the path of Andreas Dresen, who transposes the story into our days, in an unspecified mine that becomes an archetype and symbol of all the exploitative situations that still exist today in the world. The stage is consequently minimal. In the first act some barbed wire, raised platforms, a footbridge. The miners come out of the ground equipped with lamps to find some refreshment in Nick's poor shop.

What is immediately striking is the meticulous care devoted to the acting and execution of each individual singer, care that has evidently not waned with the reprise. Precise, engaging, balanced and cinematic is the stage performance; with an eye for clarity, we see absolutely convincing fisticuffs, brawls, card games, the distribution of the mail, the farewell of a comrade, the arrival of the Wells Fargo agent and so on. This, of course, without the vocal and musical quality, always very high, being disturbed in the slightest.

Great skill in staging, accurate ensemble work by all the performers for a final result that leaves one open-mouthed because of the spontaneity and precision of the entire ensemble involved, demonstrating the always high quality of the Bavarian opera company and the winning choice of having a stable ensemble.

In the second act, Minnie's house is like a tin hut in the middle of a desolate stage, almost a tangible symbol of a safe nest, an island in the middle of the wilderness. The remaining part of the stage is empty and a snowstorm can be seen in the background. The story unfolds in this far too small house, and everything is played out with verisimilitude, realism and also irony: irony in the opening scene with the Indian servants, where Wowkle is imagined pregnant rather than with a baby on her neck, which makes the dialogue with her future husband somewhere between cynical and surreal. Then there is irony in the love encounter between Minnie and Dick Johnson, in which the director plays the card of embarrassment and of a lover who is not as confident as usual, but full of insecurities and also with some clumsiness. Kaufmann's stage performance is masterful in this respect.

The sheriff's break-in and the poker game are handled with skill, precision and meticulousness, without even the slightest detail (from the cigar to the drops of blood) being left to chance. In this we can see the filmmaking background of director Andreas Dresen.

In the third act, the scene becomes even more minimal: nothing but a large, empty, multi-level stage and a steel telegraph pole. Everything is filled by the chorus, which is also wonderfully handled and naturally involved in the action. It's a great ensemble picture that lasts the whole act, from the hunt after Johnson, to his capture, until Minnie's break-in and the consequent happy ending with the lovers' escape from California.

Actually, as the two protagonists are leaving, the sky slowly closes with the inexorable approach of two stage wings representing the desert, or simply a hiatus in the background. The director does not believe in this redemption and physically blocks Minnie and Dick Johnson before they can truly leave.

A simple mise-en-scene if you like, but formidable in its execution and management of the masses and the many ensemble scenes. A masterful work, which has the uncommon value of demonstrating that theatrical verisimilitude is possible even at the opera house.

Verisimilitude to which a terrific trio of protagonists have contributed greatly. Starting with Jonas Kaufmann's eagerly awaited Dick Johnson, who did not disappoint expectations, giving us a performance that was, as always, highly personal, all about the credibility of the character, both vocally and scenically. Kaufmann has the undeniable merit of performing in an unorthodox way, always giving us new and enlightening interpretations; thus, his Johnson has the insecure traits of a young boy caught up in a game bigger than himself, who moreover in front of a woman like Minnie is inexorably embarrassed, becomes almost clumsy, and turns out quite comical. The voice goes accordingly: based on legato, half-voices, nuanced accents, unusual phrasing and perfect, sudden ascents to the high notes, like the nearly muffled, continuous start of his famous aria in the third act. Kaufmann adapts perfectly to Dresen's cinematic staging and is always in the character, for gazes, movements and emotional contact with the situation. Kaufmann goes beyond the opera singer, he makes the audience forget that he is singing. He does not act nor sing, he is on a higher level, he 'plays' the part as the Germans would say, and the result is simply captivating, absolute, convincing.

At his side is Malin Byström's excellent Minnie, who is not afraid of the comparison with her colleague, portraying the character confidently and convincingly. Byström is rich in accents and nuances, with a carefully managed singing style, which, however, is not afraid to rise to quite open high notes, almost to the point of screaming, in the most dramatic scenes. She too is a fine actress, creating a charming and motherly young girl, who transforms into a decisive and courageous woman when it comes to defending her love for the outlaw Johnson.

Completing the trio of leading roles is an unrivalled Lucio Gallo, who replaced the planned Claudio Sgura at the last minute. The Italian baritone's career needs no introduction and last night's performance confirmed an intact, powerful, well-toned voice; his phrasing is masterful, his adherence to the character complete. The sharp, sustained accents delineate a villain who is blind and fierce, but ready to keep his word in defeat and remaining breathless in the final scene in which Minnie manages to convince the miners to save Dick Johnson. Also his performance is unforgettable.

In an Opera like 'La Fanciulla del West', the trio of principals can only stand out against a fertile and well-prepared humus of 'so-called' supporting characters. Well, in Dresen's staging, it is precisely these supporting characters that form the backbone of the dramaturgy and the performance. The preparation, the adherence, both physical and vocal, of the entire cast was absolutely praiseworthy, contributing decisively to the great performance we have witnessed.

All to be mentioned, starting with Kevin Conners' excellent Nick, sympathetic and sly in the first act, sweet and compassionate in the finale, he delineates a perfect alter ego of Minnie, belting out a solid, limpid tenor voice. Tim Kuypers was a roguish, mocking Sonora with excellent vocal projection and remarkable stage participation. Bàlint Szabò a sonorous and convincing Asbhy. The entire group of miners is to prise, for excellent vocal performances and great ensemble stage play. Here and there one noticed a few failings in Italian diction that could largely be forgiven. In fact, the group of singers was made up of performers from the most diverse nationalities, just as it should be for Puccini's miners: Roberto Covatta was Trin, Roman Chabaranok Sid, Benjamin Taylor Bello, Andréas Agudelo Harry, Jonas Hacker Joe, Martin Snell Happy, Blake Denson Larkens, Daniel Noyola Billy Jackrabbit, Sean Michael Plumb Jake Wallace, Thomas Mole Josè Castro, Ulrich Ress un Postiglione. A mention then to Lindasy Ammann for her hilarious performance as the Indian Wowkle.

Daniele Rustioni conducted the Bavarian state orchestra with decisive flair and contemporary, at times expressionistic accents. The Italian conductor offered a refined concertation, reserving the right weight for the symphonic orchestral dictation and Puccini's experimental coté, highlighting each solo with clarity and precision. The relationship with the stage was not always in focus, with the orchestra sometimes overpowering the singers.

A wonderful evening of opera in a practically sold-out Bayerische Staatsoper. Long cheers in the finale for all the performers, with real ovations for the trio of stars.