No ill fate for “The Force of Destiny” in Parma 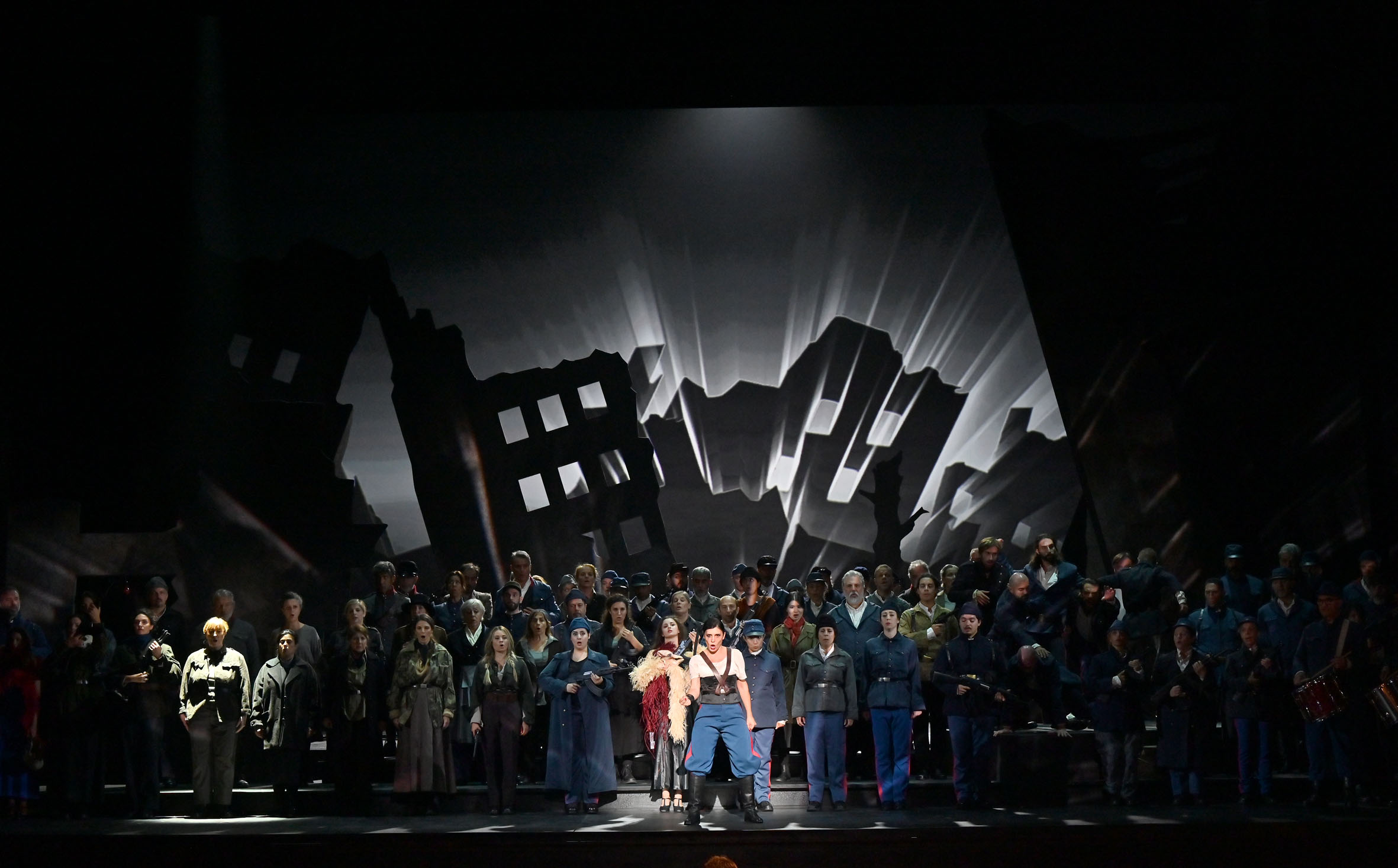 The Verdi Festival presents one of the most difficult titles in Verdi's repertoire and succeeds in an edition that is, on the whole, very successful, with an excellent vocal cast and a staging that is not highly original, but sober and functional.

The fate of "La Forza" is that of being an opera with multiple complexities: complicated in its libretto, one of Piave's most abstruse; complicated in its staging, with numerous changes of venue and the passage of time between one episode and the next; complicated for the vocal cast, which needs no less than six leading voices.

Parma wins the bet by entrusting the direction, scenery and costumes to a master like Yannis Kokkos, who chooses an elegant and minimalist cut, relying on silhouettes framed in a dark setting outlined against a luminous backdrop, where a few but effective images of grey or clear skies are projected, depending on the situation.

The scene is thus always evoked by allusions, sober and mainly empty. The references are illustrative: the convent, the crosses, the buildings in ruins from the war, but always handled with taste and linearity. The acting of the singers is classical, at times quite conventional, but fairly coherent and carefully organised. The same goes for the choir masses, attentively arranged even if didactic at times. Some major choices are good, such as the battle that cannot actually be seen, but which is witnessed by the garrison of doctors, or the scene of the Velletri camp, which comes alive with dancers in terrifying masks as pictorial images flow in the background.

Nothing memorable, of course, but an accurate staging that does a good service to the music and the show as a whole.

The singing company was excellent, with Gregory Kunde's Don Alvaro the true star of the evening and rightly greeted by an ovation of applause both after his famous aria "oh, tu che in seno agli angeli" and in the finale. In fact, the American artist delivers a vocally impeccable character, with captivating accents and a magnetic and multifaceted acting despite not being physically in the part. The high notes are always timbre and generous, offered unreservedly to the audience; the phrasing is varied and rich in accents, the voice still intact in spite of his long career. A great evening for him.

At his side Liudmyla Monastyrska's Leonora does not disappoint. Endowed with a torrential vocal instrument, she imposes herself on the character with remarkable accents, despite some few open high notes. Monastyrska has her own singing style, typically Slavic if you like, but the vocal performance is certainly captivating and the voice is prominent. The character is less engaging and refined, but in the whole, it was an excellent performance for her.

Amartuvshin Enkhbat was Don Carlo. The baritone is endowed with a gorgeous voice, homogeneous in all registers, well projected, easy on the high notes, complex in resonators. Stage presence remains the singer's Achilles' heel, even more so in the theatre where a certain clumsiness is more noticeable than in large spaces.

Completing the trio of leading characters are remarkable colleagues, such as Marko Mimica's Padre Guardiano: with his mellow, severe voice, accurate phrasing and excellent diction, the Croatian bass convinces in every respect. At his side is the hilarious Fra Melitone of the incomparable Roberto De Candia, stage star of the evening. The Apulian baritone builds the character with a sonorous and generous voice, perfect accents, and acting like a great and consummate theatrical actor. His performance was of a high standard.

Also excellent was Annalisa Stroppa as Preziosilla, very convincing from a vocal point of view, she still needs some theatrical refinement to fully delineate the character. The comprimari did well, from Marco Spotti's authoritative father to Andrea Giovannini's funny Trabuco.

Roberto Abbado gave a convincing reading at the head of the Teatro Comunale di Bologna Orchestra.

Lively appreciation for all at the end of the evening and great ovations for Gregory Kunde.